The first person to correctly identify the location of the Ding kilns is the Chinese scholar Yeh Lingzhi(叶麟趾).  In his book (古今中外陶瓷汇编) written in 1934, he mentioned that the Ding kilns were located in Jiancicun (澗磁村) in Quyang County (曲阳县) of Hebei.  Following the lead in his book, the Japanese ceramics expert, Mr Fujio Koyama discovered the site in 1941. Besides Jiancicun (澗磁村) , the other Ding kiln site in the Quyang County is Yan Chuancun (燕川村).  During the Song Dynasty, Quyang county came under the jurisdiction of Dingzhou (定州).  The Chinese ceramics expert Chen Wanli investigated the site in 1956 and excavations were carried out by the Hebei Province Bueau of Culture in 1961-62.  It was established that Ding Kilns started operation during Tang and ended in Yuan period.

Hebei Jing xing (井陉), discovered more recently in the 1990s, also produced Ding type wares.  The good ones are hardly distinguishable from those from Quyang area.  But generally they are of poorer quality with presence of dark spots in the glaze.

Due to the fame of Ding wares, there were many kilns which made Ding type wares with carved and impressed motifs.  Among the more notables were Beijing Longquan wu (北京龙泉务) and Shanxi (山西) Pingding (平定), Huozhou (霍州), Changzhi (长治) and Hunyuan (浑源).

The most common product during the Early Tang Period was an exterior yellow and interior white glaze ware with grayish, coarse body.  The body is coated with a layer of white slip before application of the glaze.   During this early Tang phase of production, many kilns in in Northern China produced similar products with yellow, white or  brownish glaze.   They are hardly distinguishable and difficult to attribute a particular piece to its actual production site.

By the late Tang period, the Ding potters were able to produce quality products which were imitation of the celebrated Xing ware.   The most typical vessel copied was the bowl with yi-bi foot (玉壁底) (ie base with a hole at the centre) and mouth rim with a rolled lip.  In the past, some of the better Ding bowls were wrongly identified as Xing.  Both the glaze of Xing and Ding could be white or white with a tinge of green. This is the result of reduction firing in the kiln using wood as the fuel. The best Xing wares could be distinguished by their emaculate finishing.  However, those medium range products of Xing and Ding are hard to tell apart.  For the yi-bi bowls, both Xing and Ding also produced those which were not glazed on the outer base.  The glazing of Xing wares is generally more even and  smooth.  However, there are also those which like Ding wares, have uneven traces of visible streaks, usually termed "tear drops".  For more on Xing wares, please read this.

During the 5 Dynasties, Ding bowls were usually made in the shape of flowers with 3, 4 or 5 petals, with last type being the most common.  Most of the other vessels such as vases and pots are usually plain without decorative motif.  Analysis  showed that during the late Tang to 5 Dynasties period, Ding ware has the best paste and glaze which deteriorated during the Song and Jin period.

By Early Northern Song, Ding kilns were producing its distinctive type of white wares and replaced Xing as the major producer of Northern white wares.  Excavations showed that Ding kilns started producing those famous transparent glassy ivory tone ware by the beginning of Northern Song Dynasty.  The ivory tone of the glaze was the result of firing in slight oxidation atmosphere.   Coal started to replace wood as the fuel for firing.  (Past experiments carried out by the Chinese scientist showed that after the ivory tone shards were re-fired under reduction atmosphere, the tone of the glaze became a light bluish tone much like those of qingbai wares.)

During the 5 Dynasties and Northern Song Period, Ding ware had achieved such a reputation that the wares were selected as local tribute gifts to the imperial court. Indication of the imperial connection were inscriptions (usually on the base) such as "guan (官)" & "xin guan (新官)" and name of halls in the imperial palace such as Jingyuan ( 禁苑)", "Juxiu (聚秀"),"Cishou (慈寿)", "Deshou (德寿)" and " Fenghua (奉华)".  They are usually incised after manufacturing and hence unglazed. There are also marks of departments in the imperial palace such as  "Shanyao Ju (尚药局)" ie Department in charge of medicine for imperial household and "Shanshi ju (尚食局)", ie Department in charge of food for imperial household. Marks of those two departments were incised and glazed during the manufacturing process.

By the early Northern Song Period, Ding kilns were able to produce a wide varieties of wares, such as ewers, vases, jars, incense burners and pillows. The favourite decorative motif of this period was elaborate relief lotus carvings, especially popular on kendis, jar and bowls.  Kendi (Kundika) was a particularly popular vessel during the early Northern Song period.   Some of the best and representative Ding vessels of this period were recovered from the chamber below the pagoda of the  Jing Zhi temple (静志寺).  They are now housed in the Dingzhou Museum.  Some of the pieces are shown below.

During this phase, Ding potters also applied fine incised motifs to some of the wares.  All those decorative elements and techniques showed the strong influence of Yue Ware of Zhejiang.  By the the Mid Northern Song period, the  Yaozhou and Yue style carved floral motif with combed lines were also adopted by the Ding potters.

Ding potters further experimented and developed the carving/incising method and by late Mid/early Northern Song Period, a distinctive form of carved outline with incised parellel line were used for some part of the floral motif.  The carving/incising is fluent and spontaneous.   Carved lotus petals could also still be found during the late Northern Song period.  However, the petals are more slender and finishing more rough compared with those of the earlier period. 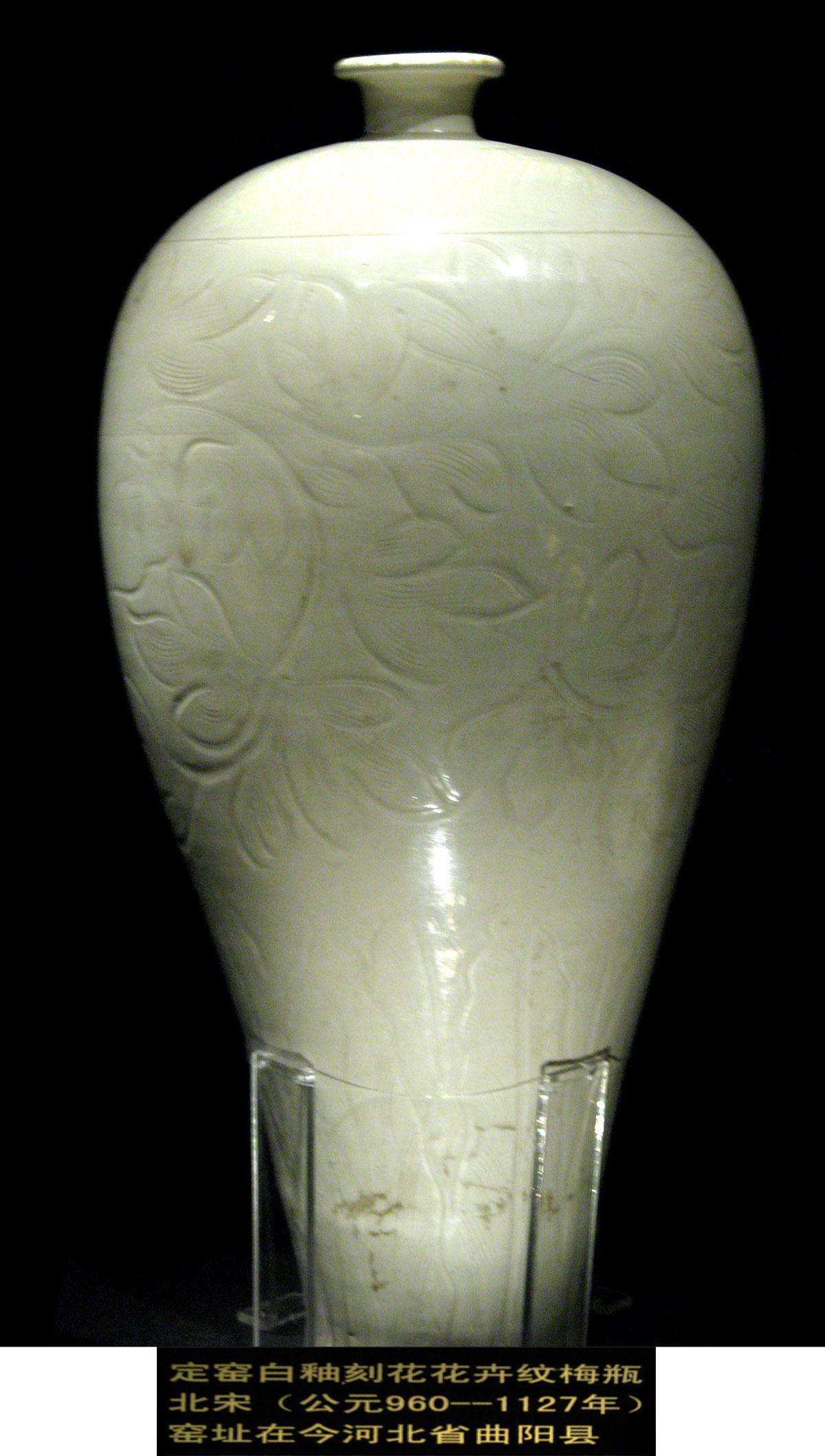 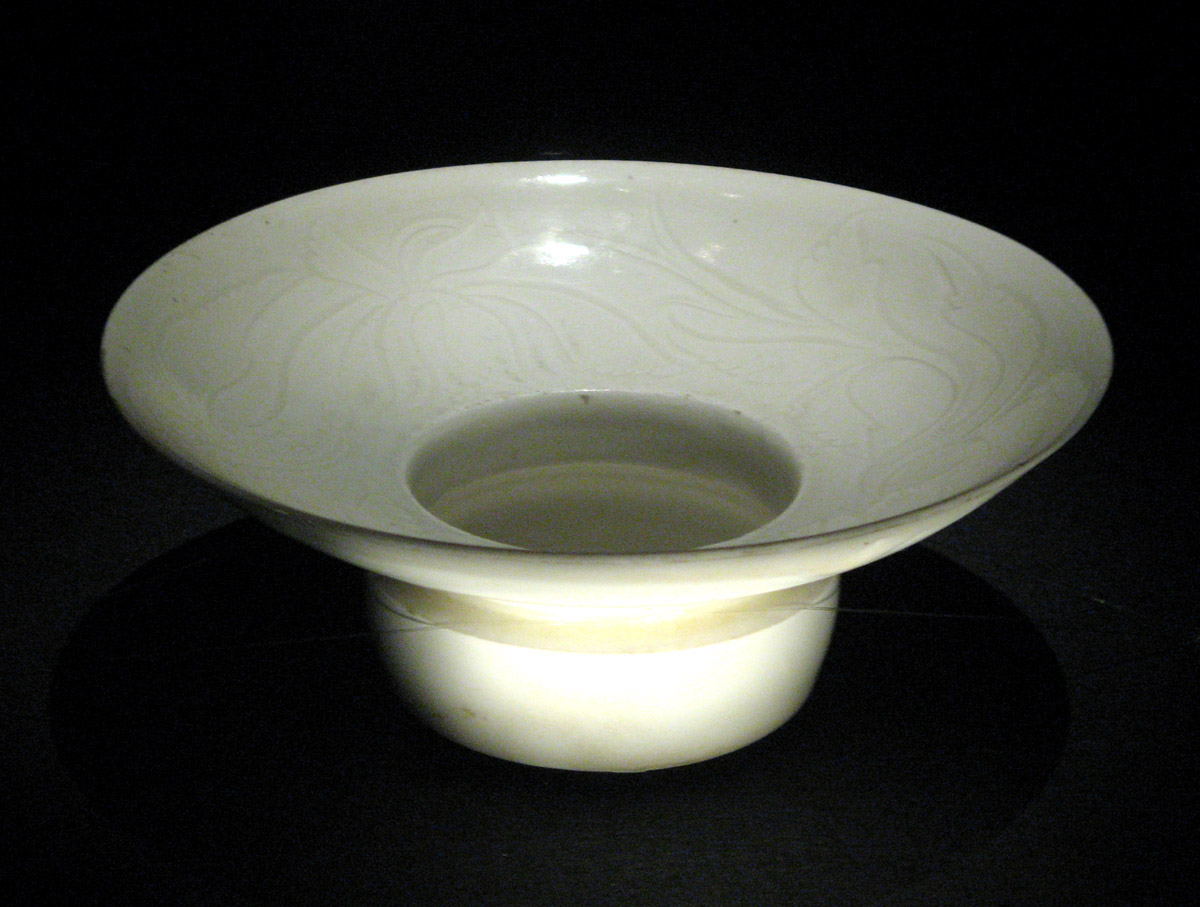 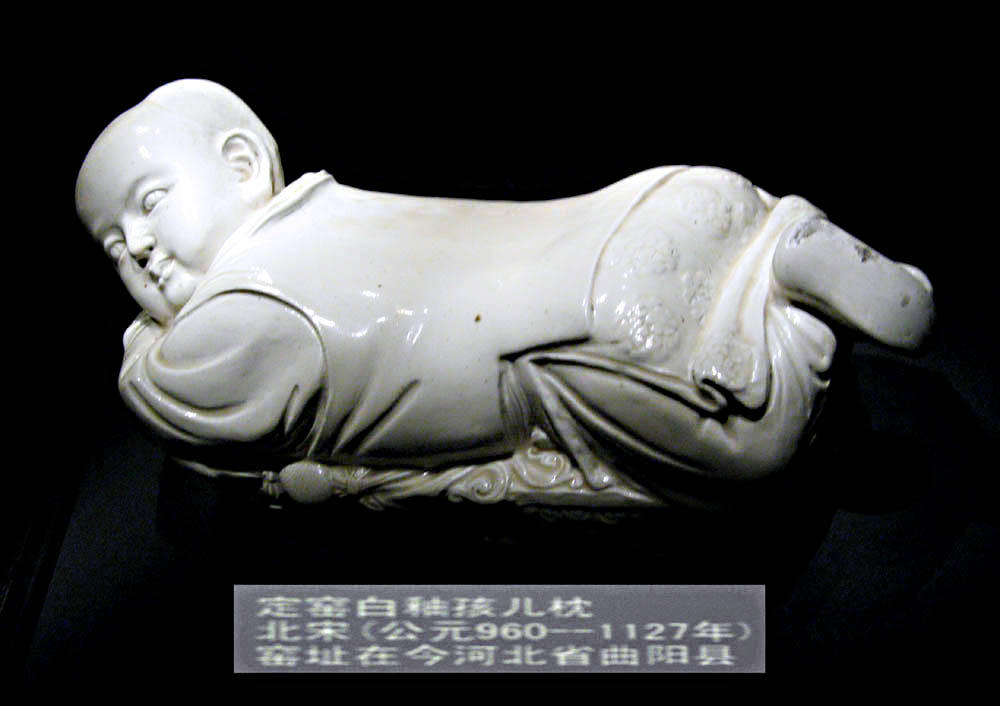 But it was the molded motif, first introduced during the Mid Northern Song period, which was usually associated with Ding wares.  The molded technique gained popularity during the late Northern Song and replaced the carving method as the main decorative technique during the Jin period.  Usually the interior of the bowls and plates are densely decorated with molded motif.  The outline of the motif is sharp, fluent and lively on the good quality pieces. They represented the highest standard of molded motif achieved by ancient potters.  The use of mold also opened the way for more sophisticated and elaborate decorations, standardisation of the finished products and reduction of wastage.

During the Jin Dynasty, molded motif became the main decorative technique and production volume was huge.  Only a relatively small number of wares with  carved motif continued to be produced.  The motifs were more carelessly and sketchily executed as compared with the earlier works.

There were  also lower quality type of bowls/plates produced using the stacking method.  There is an unglazed ring on the interior of such item, on which rest the foot of another bowl/plate.   Stacking firing method which maximises the use of space, was used by many other Northern kilns since the Jin period.

One of the most important contributions of the Ding potters was the invention of the inverted firing Method.  It was subsequently adopted by many kilns including Jingdezhen.

The inherent problem of warping when firing the thin Ding bowls and plates in upright position prompted the potters to look for solution. The potters devised the method of firing the vessels upside down. To do so, it is necessary to scrap away the glaze on the rim so that they do not stick to the saggar. This method enabled the spreading of the weight of the vessels over a wider area and solved the problem of warped vessels.  An added advantage is that it increases production volume.   An interesting change to the foot of the bowls and plates also took placed subsequently.  During the Jin period,  the foot of the bowls/plate is short or even totally almost non-existent.  This increased the stacking space and further increased production volume.  The stacking method also requires the standardisation of the size of the bowls and plates.  The use of moulds facilitated the standardisation of the size.  Elaborate and attractive relief molded decorations were also impressed on the the plates and bowls more expeditiously.


Other types of Ding Wares

From the mid Northern Song onward, there were also black and brown/red Ding Wares.  Both black and red colors were derived from glaze with iron oxide.  Some have gold-leaf motif baked on at a low temperature.

In Hangzhou, the building construction activities in the last few decades have uncovered many fragments of Ding wares.  An interesting type found recently was fragments of bowls/plates with outer wall in biscuit and coated with lacquer.

3   The Chinese potter by Margaret Medley